the two hardest words that have ever left my lips, but what was even more difficult was getting to the point of saying those words.  People often ask, “Did you know you were gay?”  My response often, “Did you know you were straight?”  Growing up in a straight world; a society that celebrates being straight, “normal” and all that goes with being how your parents envision your life to be.  My parents have always been accepting of my gayness(I don’t like “lifestyle”, “homosexuality” sounds so scientific, and I hope we can put to rest the idea of “choice”.)  But, what they said to me when I told them, “I’m gay” is that it was never a life they envisioned for their child because of the difficulty.  I also believe that parents have hopes and dreams for their children based on the straight society in which we are raised.  Kids are born, they play, they learn, they grow, they leave home, they marry, they have kids…..that is what our society celebrates.  That, I believe, is what parents hope for their children.  My journey has been different.  What I know for sure is that my family may not totally understand my journey, but they have always been supportive and most of all, proud of who I have become.  I’ve lived 38 years, but I’ve lived my truth the past 12 years. 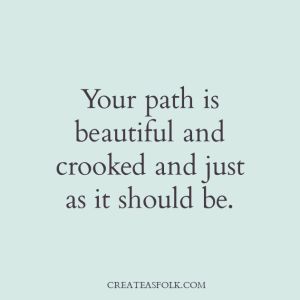 So back to that age old question gay men are asked, “Did you know you were gay?”  No.  I grew up in a time that there were not gay role models.  Gays were not very present, if at all, on television.  The gays in the media were Liberace or Elton John, certainly two men I never identified with.  So though I knew I felt different, I never really knew why.  I played with the boys in the neighborhood, rode bikes in the woods, went swimming, played with WWF wrestling figures, but around 6th grade, when they were playing football in the backyard, I started to find that I would rather lay in front of my stereo at home and listen to Wilson Phillips and Tiffany.  Hahaha.  Honestly, I laugh now.  I loved Barbara Mandrell and the Mandrell Sisters when I was five and would put on weekly shows while watching their Saturday night variety show on NBC.  I loved and will always love, Whitney Houston.  I laid in front of my stereo every Sunday morning for four hours and listened to Rick Dee’s and the Weekly Top 40.  I watched Star Search on Saturday afternoon at 5 p.m. and then watched the same repeat episode on Sunday at 4 p.m.  Did I know I was gay?  No.  Did I know I had very different interests than the fellas on the street?  Yes.  That was basically how I lived my life from age 12 to 18.  I did not necessarily shy away from being me, but I was aware that I needed to hide some of my interests as not to be made fun of and always in my head hoping, “this is just a phase.  I’ll grow out of it.”

Funny, I never “grew out of it.”  I went to college and still repressed any feelings I had toward boys.  What was wonderful in college is that I met my friends Herb and Cary.  Though none of us were out at that time, we connected on a level that was better for me.  Cary had Entertainment Weekly too and openly loved Mariah just as much as I loved Whitney.  Herb loved Celine Dion and wanted to watch “Deep End of the Ocean” with Michelle Pfeiffer and Robert Redford.  Glory Glory Hallelujah, finally people like me.  Again, all of us were struggling with the same acceptance of ourselves, but at least I felt more comfortable knowing that I wasn’t the only guy with interests other than the “norm.”

It wasn’t until eight years later, when I was 26, that I finally, FINALLY, was able to say, “I’m Gay!”  I told my friend Dennis after his “coming out” party.  He’d recently moved in with a new roommate.  It was the first party I ever went to with all gay men.  The party blew my mind.  I met so many people and sat with a guy named Paul and talked about General Hospital for about two hours.  Haha, Heaven!  What is this easy NOT uneasy feeling in my stomach?  Why does this feel so “right?”  Dennis walked me out to grab a cab and my life changed forever, “I’m gay Dennis.”

For the past 12 years I have been living my life “through.”  It has not always been easy.  Telling my mom and dad was excruciatingly painful.  Feeling I had to keep my gayness a secret from work was increasingly more difficult as I wanted to involve my friends in my entire life, but I lived a double, smoke and mirrors life for several years.  What I know now that I didn’t know then, is that everyone has been accepting and loving of me and my gayness.  The fear of being rejected never came true.  The fear of work friends caring never came true.  I never felt that people did not “know” rather, I just had not “told” them.  A funny story is the time I was at recess with a few of my 5th grade students.  The conversation between four girls happened right in front of me, yet I was not part of the conversation, I simply heard it.  “My parents say that if Mr. T is gay that is fine because he’s a great teacher.”  “Yeah, I asked my mom if he is gay and she said probably but that it didn’t matter because he’s a really nice guy.”  Hilarious!  What that moment taught me is that errrrrrrrbody “knows” I’m gay, I just haven’t “told” everybody.  So now, 12 years later, my life just IS.  I’m gay.  It’s not a big dramatic thing.  I don’t hide my life from anyone.  I used to feel it had to be this big announcement; a planned event.  Telling my family and my friends at first was such a big deal.  I had to keep it a secret from this person but not that person.  If I was dating I could only tell this person or that person.  When I would go to gay bars I would only tell this person but not that person.  I distinctly remember the first or second night I ever went out to Boystown bars.  I was sitting in the chair at my computer on Magnolia Ave.  I was on the computer checking email before I left.  My body was convulsing.  I was shaking so bad with nerves that my muscles seized up and I couldn’t move.  Somehow I calmed myself down and got out of the house.  That night I walked into Sidetrack and said to myself, with a sigh of relief, “Oh, this is what it is supposed to feel like to go to a bar.  This is what is normal for me.”  I walked into the bar with ALL men.  It was amazing and wonderful.  I was finally living my truth.

So here I am, 12 years later, at the Gay Games getting ready to run the 10K today.  For many reasons this is an incredible experience.  In high school I never had the confidence to join the swimming team, even when I was asked to do so by the coach.  “I’m not an athlete” I would think.  Now I’m an athlete participating in one of the biggest sporting events of 2014.  12 years ago I wasn’t comfortable just being myself, now I’m a confident man, dancing in the streets last night with other men from around the world.  I’m posting to social media telling my story because I can.  It’s my truth and it is who I am and who I was born to be.  “To thine own self be true.”  August 5th is when I celebrate my birth.  August 10th is when I celebrate my life.  Say YES to Life!