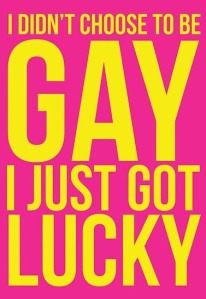 I’ve always tried to be myself throughout my life.  Of course that wasn’t always easy due to that little word, “repression.”  But overall I think I have done a pretty good job at least surviving some of those milestones.  I survived elementary school expressing my love and devotion for Whitney.  I survived middle school.  Lawd, we ALL survived middle school.  I survived high school exploring my interests in musicals and band and hanging out with friends.  I survived college…..lawd sometimes I wonder how I survived college.  I did it mostly staying true to who I was or trying to figure it all out.  I unabashedly loved *NSync and Celine and still, Whitney.  I did it dancing at bars and making mixed tapes and reading Entertainment Weekly and kind of dating girls, but exploring affection for boys too.  And I’ve survived 15 years of adulthood here in Chicago exploring me and trying to figure it all out.

One of the greatest gifts I have given myself is allowing me to live my life.  Although society has certainly played a role in shaping who I am and trying to keep me a “man” by design, I was designed different and thank the LAWD for that.  Last weekend I was at my good friend’s birthday party.  It had a dance floor, 3 gays, and a lot of beautiful women.  There were a lot of moments, like free style dancing to Journey’s “Separate Ways”, two of us boys jumping into the windows during a rendition of “Out Tonight” from RENT(musical people, you get it), and just a lot of fancy, wild, FREEDOM of dance.  While we were all doing that, another friend was at a table and a guy there said, as he looked at the amazing time we were having on the dance floor, “Sometimes I wish I was gay.”  I wonder, is he saying that he wishes he was out there dancing up a storm because there are so many beautiful women?  Or is he saying that because we were just being wild and free and not caring what society says about it?  I tend to believe it is the latter.  Society really sucks sometimes when it teaches men how “real” men should act.  I feel lucky because I have almost always been able to be me.  I’ve always had friends and family who have allowed me to dance like a fool on the dance floor at a wedding or at the bar.  Last spring I was at a bar in Chicago and it was 80s/90s night and right when we walked in Whitney played, then Janet, then Mariah.  It was amazing and we were dancing like no one was watching. I’m pretty much always dancing like no one is watching.  It was SO fun and we were all sweaty fools.  I noticed some twenty somethings laughing, pointing, and taking photos.  Oh, youth! They only wish they could be as free as us thirty somethings who know how to Say YES to Life without feeling bad or ashamed. 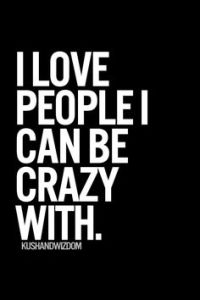 It just speaks to how our society sends messages to our youth.  I wish more men were able to watch some crazy fun gay guys and think, “man I wish I felt comfortable out there.”  More than anything else, I invite them to dance up a storm, get out there. Release a little of that “how a man is supposed to act” feeling and let loose on the dance floor men!  If you are raising boys, let them explore their interests.  Let them know, leading by example, that it’s ok to dance like no one is watching!

Tonight in yoga my instructor started with an intention, “I’m clear.  I’m courageous.  I can.”  It really resonated with me as I pondered this blog post.  As I mentioned above, I have survived to age 38 fairly unscathed with society’s standards for men and how we should act.  Luckily as a kid, in 1987, my dad introduced the American Music Awards to me.  He saw it listed in the television guide in the paper.  We had just gotten our first VCR.  “You should tape this award show tonight.  You might like it.” It was the night Whitney won award after award after award, 5 total, for her Whitney Houston debut album.  That was the night I fell in love with her.  Of course there were times as a teen I wanted to scream, “I LOVE YOU JORDAN KNIGHT!” but instead I felt I couldn’t, rather I littered my bedroom walls with Paula Abdul BOP Magazine pictures.  There were times in college that I really wanted to cuddle with boys, instead I did what society taught and cuddled with girls(like a few times-don’t get crazy). What comes with age, hopefully, is wisdom and clarity. Finally around age 26 I had the clarity to accept my homosexuality.

Certainly throughout my life I faced challenges that prepared me for this life.  My mom taught me to be courageous at the young age of 8 when it was realized in 2nd grade that I did not know how to read.  Elementary school worked itself out, but when I hit sixth grade it took me hours nightly to complete my homework.  Due to my dad traveling heavily for work, my mother was home alone with my brother and me a lot.  I just remember her picking me up from home after working all day, racing across town to get my allergy shot.  Other nights she had to take my brother to various sports practices.  She always made dinner, cleaned up, and managed to keep my ADD in check as I would spend hours doing my homework, much of the time sitting by my side.  In my line of work I know so many parents who are not willing to take the time to be a PARENT.  Luckily for me, my mother did and through it all, taught me how to be courageous. That certainly has served me academically, professionally, and personally in my life.

I didn’t always feel like I could be myself growing up.  My parents did their best to support me and my varied interests without making me feel guilty or shame.  Though he teased me in many other ways, my brother never made me feel bad about my interests in watching hours of Star Search, award shows, pageants, or taping hours of Whitney Houston coverage on television. But still, I didn’t always feel that I could put my “shows” on in public or in our living room. I always knew I had a safe place at home, but even there I sometimes hid in the basement to create solo dance shows or other acting/performing shenanigans. What I learned growing up in my house, never through direct conversation, mostly just through experience, was that “I can.”  I can watch award shows and Miss Universe and it’s ok.  I can be successful and complete my academic work.  It might have taken me four hours a night, but I could do it.  “I’m clear.  I’m courageous.  I can.”

What I know now is that society has certain rules and standards and roles that it tries to get girls and boys to follow. Depending on where children are raised, how they are raised, and by whom they are raised has an incredible impact on who they are as an adult member of the same society that “raised” them.  It takes courageous parents, siblings, aunts, uncles, cousins, friends, teachers, neighbors, and all the rest of society to allow our kids to explore their interests, out in the open, without judgement, ridicule, or expectation. 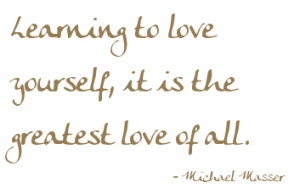 I am profoundly grateful that I am gay.  It has allowed me to not follow the rules and to be different.  It has allowed me to not follow the norms set before my male peers.  Being gay has allowed me to buck society.  It hasn’t always been easy, but growing up isn’t for anyone.  It hasn’t always been accepted, but not everything a child does ever is.  Whether it was the family who raised me or the mostly kind people I grew up with or whether it came from within me, I think I turned out kind of alright. Luckily for me, I have never thought, “Sometimes I wish I was straight.”

2 thoughts on “Sometimes I Wish I Was Gay”